CultureMap Austin wrote a super cool article about our methods of reducing waste! Root to fruit & nose to tail! It takes a strong kitchen culture to have the discipline to utilize everything!

Battling food waste isn’t a new issue in Austin restaurants. Ingredients, after all, cost money, and using every available ounce ensures that margins don’t go in the trash. Still, a new generation of Austin chefs is taking the common kitchen practice even further — not only practicing whole animal butchery, but using every available kitchen scrap.

North Loop’s Foreign & Domestic has always been at the forefront of mindful cooking. Former owner Ned Elliott was a pioneer of snout-to-tail menus long before the the idea was common in the Capital City. Now, chefs Sarah Heard and Nathan Lemley — who took over the restaurant in late 2017 — carry on the tradition.

While speaking to CultureMap about how her eatery minimizes food waste, chef/owner Sarah Heard happens to be on her way to procure tomato leaves for a pasta dish. “I don’t know if anyone else in Austin is using tomato leaves right now, but they should be,” Heard says.

Tomato leaves, which would otherwise be bound for the compost bin, make the base for a sauce that also includes cheese whey — a byproduct of the restaurant’s cheesemaking operation — and also go into the bright green pasta. “And then there’s a salad of fresh tomato leaves and shaved red onions on top,” Heard says.

The restaurant has been experimenting more and more. Recently, the kitchen prepared a white French onion soup. “It was kind of wild,” Heard says. “Because the whey has a meaty flavor to it — and we used that instead of beef broth. But that’s an entire menu item pretty much made out of something that would have been thrown away.”

Foreign & Domestic is just one of the Austin hospitality players that is looking to minimize food waste and repurpose ingredients that would’ve once been destined for the trash can or compost bin. The growing culture was helped along by the city’s ambitious zero-waste goals, which aim to divert 50 percent of waste from landfills by 2040.

Ian Thurwachter, executive chef of East Austin Italian restaurant Intero, has also been on a journey to find inventive ways to use leftover ingredients. He does traditional kitchen tricks like using meat bones for stock, but also creates a chili vinegar from pepper scraps and a “yum-yum” powder out of dehydrated veggie scraps.

His wife, Krystal Craig, runs the front of the house, and says the couple strive to be as zero-waste as possible in their own lives. “We believed that we could translate that into a restaurant that also embodied our cooking style,” she says.

Despite the positive environmental impact of low- and zero-waste kitchens, taste is still at the forefront. By using underused plant and animal parts, chefs open their menus up to new flavors and textures. The culture shift is ultimately a boon to Austin diners.

“Once we became aware of what we were throwing away, and started asking ourselves, ‘why are we throwing this away?,’ then we were able to figure out really delicious ways of using things that otherwise would just go into the trash,” says Thurwachter. 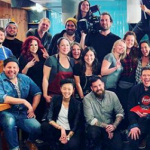