We are a Chef-Owned 47-seat restaurant that has become a neighborhood favorite for expertly prepared fun food at reasonable prices. 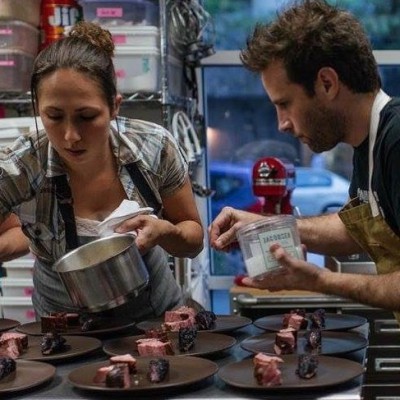 Born in Katy, Tx Nathan grew up in a family that ate dinner together every night of the week- making food a big part of his life.  His grandmother had owned a bakery in Yoakum, Tx so there was no shortage of cakes and pies around the house.

Sarah Heard grew up in Conroe, Texas watching her mom and grandmother cook from scratch, developing a taste for food that is crafted, not produced.

Nathan attended culinary school at The Art Institute in Houston and worked his way through the best restaurants in Houston including Tony’s, Voice, and Stella Sola.  Ready for a change in scenery he then moved to Austin to work at the newly opened Foreign  & Domestic and soon took on the Chef de Cuisine position.

Sarah was hired in 2006 as a banquet server at The Mansion at Judges Hill. She was moved to the kitchen quickly  & promoted to Executive Sous Chef by the Owner, Lisa Weidemann, who remains her mentor. She left The Mansion in 2012 to accept her first Executive Chef Job at the Winfield Inn.

A few years later, after traveling and staging across the country, Nathan connected with Chef Shawn Cirkiel- who brought him on as The Exec Chef at Parkside and the Backspace.  Working for Cirkiel, Nathan gained a greater knowledge of the business as well fine tuning his style of cooking in a busy restaurant.

In 2013, at the age of 24, Sarah accepted the title of Banquet Chef at Shawn Cirkiel’s downtown destination, Parkside. At Parkside she met fellow chef & future business partner, Nathan Lemley.